Home
Dates & Events
Parents and Relatives Day
What Is Mother’s Day All About?
Prev Article Next Article

We all have a special bond to our moms so why not show it on this special day? So, what is Mother’s Day all about, how did it begin and most importantly what should you get for your mother this holiday?

Well, quite simply it is a day to celebrate and honor all mothers, stepmothers, mother-in-laws, and guardians (eg. foster parents).

Gifts usually given to mother’s include a card, flowers, chocolates, breakfast in bed, and even a meal out. But there is so much more to this day than you probably realize

There is some similarity between this day and Father’s Day. Both of these special days can be traced back to about two thousand years. Although there are a number of different origins associated with Mother’s Day.

I will go through each of these in this post.

Before I do begin I just want to point out why this date is included on a genealogy website.

As I have researched my ancestry for a number of years now I have grown to appreciate my family more.

From time to time we take things for granted, and this is especially true for our family who are always there for us.

Check out the following short video from Ancestry that honors mothers everywhere.

When you research your family’s history you learn to appreciate them more and what they really mean to you.

It is also true to say that if it wasn’t for their life choices then we wouldn’t be here today.

If it wasn’t for your great grandfather, say who traveled to the new world, then you may not be here at all. It’s worth thinking about!

When Did Mother’s Day Start?

Although this recent convention began in America in the early 20th Century it does have its origins in Ancient Greece and Rome.

The Greeks and Romans worshiped the mother goddesses Rhea and Cybele.

Both of these women were described as the mother of the gods. These ancient goddesses symbolized both fertility and the bounty of the earth.

This occurred three weeks before Easter Sunday, the fourth Sunday of Lent to be precise.

Celebrating the beginning of life at the Mother Church!

Parishioners would return to the church where they were baptized and began their early life. This church was known as the Mother Church. This special service though did not celebrate motherhood.

This celebration though in time became secular, meaning free from religion. On this day children would present their mothers with flowers and gifts.

During the 1930s and 1940s this custom morphed into the American version of Mother’ Day that we all know of today.

Because of this many people in Britain blame America for changing the name from Mothering Sunday to Mother’s Day. The British though in fact changed the meaning of this event themselves.

The Americans can thank the Mother of Mother’s Day Anna Jarvis for giving mothers their own special day. Anna’s mother Ann Reeves Jarvis set up Mother’s Day Work Clubs in the 1850s.

One of the purposes of the clubs was to improve sanitary conditions. She would teach mothers how to properly care for their children and so help to reduce the infant mortality.

Later on the clubs helped wounded soldiers during the American Civil War of 1861 to 1865. After the Civil War had ended Ann created a Mother’s Friendship Day.

This particular day saw mothers of veterans from the Confederacy and the Union united. Ann was a peace activist and treated wounded soldiers from both sides of the war.

Anna wanted a special day for all mothers!

After her mother’s death in 1905, Anna sought for a special day to not only celebrate all mothers but her own mother Ann.

She had help from a businessman and as a result of this held events in 1908 in the cities of Grafton, West Virginia and Philadelphia, Pennsylvania. Grafton was her family’s hometown and Philadelphia was where Anna moved to.

She wrote to clergymen, educators and politicians to help spread this special day all over America. As a result of this it soon spread over the United States within a few years.

By 1914 President Woodrow Wilson proclaimed that the second Sunday of May would be Mother’s Day. This day would be used to express love and respect for all mothers of America.

To Anna’s resentment this special day became commercialized. Retailers would sell flowers, candy and cards for people to give to their mothers.

By 1920 Anna no longer wanted to be associated with Mother’s Day.

Earlier in 1912 Anna attempted to secure a trademark for Mother’s Day and also the phrase “second Sunday in May“.

She was also adamant that the spelling of the day was Mother’s and not Mothers, the latter means commemorating all mothers.

Then Anna turned her back!

She even tried to threaten lawsuits by suing the infringers, i.e. the retailers who were making a profit. While protesting Mother’s Day she was arrested for disturbing the peace.

Surprisingly, or maybe interestingly, Anna never married and she herself was never a mother.

As Anna’s mother loved carnations this became the official flower of Mother’s Day.

A red carnation is a symbol for honoring a living mother, while a white carnation honors a mother that is no longer with us.

When Is Mother’s Day?

So you may be asking yourself when is Mother’s Day? Most countries have adopted the second Sunday in May.

However, fifteen countries observe March 8th as the day to honor their mothers. This day is also known as International Women’s Day.

The United Kingdom, Ireland and Nigeria themselves celebrate this special day on the fourth Sunday of Lent.

The United States, Canada and Australia spoil their mothers on the second Sunday of May.

Why not check out other dates that countries all over the world celebrate Mother’s Day.

There is nothing more special than giving your mom a gift that clearly shows you have put a lot of thought into it.

So, if she is interested in genealogy then how about buying her a family tree wall decal kit.

With this kit she can proudly display her family tree which can make a great feature wall.

There are only four steps to put the decal on your wall.

Firstly, you will need to cut out the individual pieces. After that you just peel off the backing paper and then apply to your wall.

Then the final step is to remove the peel transfer sheet from the back.

Once you have applied the decal it will just blend into the wall as it looks just like paint.

It can really make an impression to any house guest. It can be put in the foyer, living or dining room, or maybe she would like it in her bedroom.

Please note though that this is just the wall decal. You will also need to buy the photo frames as well to finish off this stunning feature for your mother. May I suggest this set of 10 solid wood frames.

They will definitely complete your mother’s family tree wall decal.

I hope you enjoyed this article regarding what is Mother’s Day all about. If you have any questions or comments then please leave a comment below. 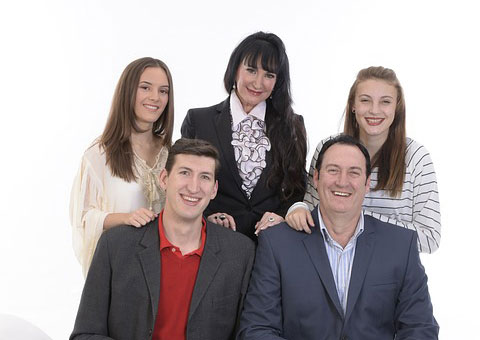